Pianist Kyung-Mi Kim received both Doctor of Music and Master of Music degrees in piano performance from Indiana University. She also received master’s and bachelor’s degrees in piano from Ewha Woman’s University in Seoul, Korea. Her major teachers include Jin-Woo Chung and Yoon-Bo Chung in Korea. At Indiana University, she studied with the late Leonard Hokanson , a pupil of legendary pianist Artur Schnabel, Shigeo Neriki, and Evelyne Brancart.

Throughout her career, she has performed more than 500 recitals, collaborating with numerous outstanding vocalists and instrumentalists in Asia and throughout the United States. Dr. Kim has played for many summer music programs, masterclasses, and summer opera workshops as a coach. She was invited to be the pianist for the Michael Palmer International Conducting Workshop in 2007 and 2008. She has also been invited to the 2009 American String Teachers Association National Solo Competition to serve as pianist. Recently, Dr. Kim performed in recital with award winning tenor Russell Thomas, for Atlanta Symphony Orchestra 2014-2015 Artist in Residence series.

Dr. Kim moved to Atlanta in 2006 and became one of the most active collaborative pianists in the Atlanta area. She joined the Georgia State University School of Music in 2006. 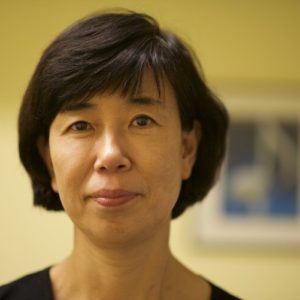