In the past decade, he has given more than 200 concerts at major venues around the world, including Westminster Abbey in London, Notre Dame Cathedral and St. Sulpice in Paris, Chapel Royal in Versailles, Moscow Cathedral, Berlin Cathedral, the Münster in Ulm, the Domkirke in Oslo, St. Thomas Church Fifth Avenue in New York, the Cathedral-Basilica in St. Louis, St. James Cathedral in Toronto, Suntory Hall and Metropolitan Art Space in Tokyo, Kyoto Concert Hall, the Cultural Centre in Hong Kong, et.al.

Critics and organists have called him a “prodigious technician” (La Presse, Montreal), and have praised his “effortless, poetic,” “colourful and exciting playing” (Prof. Landale and ORGAN Canada), whose concerts have “thrilled the audience” (Mixtures). His performances have been broadcast on Pipedreams, Organlive, Radio Ville-Marie, and Saarland Broadcasting.

In September 2005, he became the first German appointed organist in residence at the Concert Hall Kitara in Sapporo, Japan. During one year, he gave approximately 50 recitals in Sapporo and major venues throughout Japan and was in frequent demand as a teacher (organ studio, master classes, etc.).  During his tenure there, he also recorded a solo-CD with works by Bach, Mendelssohn-Bartholdy, Reger, Liszt, Brahms and Wagner, as well as a DVD presenting Kitara’sorgan, and concertized with orchestras (Sapporo Symphony Orchestra and the Filarmonica Arturo Toscanini under Lorin Maazel).

Dr. Korndörfer is a triple prizewinner of the Canadian International Organ Competition, held in Montréal in 2008 and 2011. His talent has also been recognized with numerous scholarship awards from organizations such as the German Academic Exchange Service, the BACH-woche Ansbach, the Festival du Comminges, the Oberlin Conservatory (Dean’s Scholarship), McGill-University (Max Stern Fellowship) and the Government of Quebec (Quebec Merit Scholarship).

Aside from his busy concert schedule on three continents, Dr. Korndörfer has given master classes and presentations at conventions, universities and concert halls in the USA, Japan, Hong Kong, France and Germany. Furthermore, he has published in American, Belgian, British, French, German, Russian and Swiss music journals, and has served on the jury of the Quimby Competition held at the AGO Southeast Regional Convention in Charlotte, SC, in 2015.

In 2009, he recorded “Trumpet Ave Maria” together with Kazuhiro Maekawa (solo-trumpet of the Sapporo Symphony Orchestra) at the Harmony Hall in Fukui (Japan). Two years later, his second CD “Variations on America” was released by the ORGAN-label. 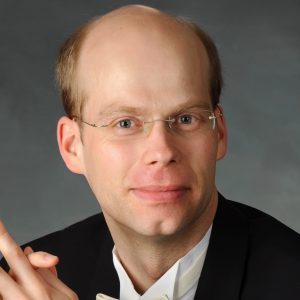