As a professional trumpet player, he has performed in all musical mediums from symphony orchestra to jazz quartet and has free-lanced all over the world.  He is currently active as a clinician, an adjudicator, and as a freelance trumpet player.

He is a dedicated jazz educator and has served as past president of the Georgia Association of Jazz Educators and chair of the International Association of Jazz Educators Curriculum Committee.  He is the founder and Director of the Rialto Youth Jazz Orchestra and the musical director of the Rialto Jazz for Kids middle school jazz outreach program.  Both programs have been nationally recognized for their excellence

As the director of the GSU Faculty Jazztet he has appeared at numerous venues in the Southeast United States including the Atlanta Jazz Festival, the High Museum Jazz Series, the International Association for Jazz Education Conference, and the Jazz Education Network Conference.   He has also performed with such world-renown jazz artists as Kenny Werner, Clare Fischer, John Hart, Kevin Hays, Conrad Herwig, Marc Copland, Randy Brecker, Rez Abbasi, and many others.  As a clinician/teacher he has served residencies, given masterclasses,  and performed at the Conservatory of San Juan, P.R., the Taipei American School in Taiwan, the Singapore American School, the Bangkok International School, The University of Northern Colorado, Columbia College Chicago, The Conservatory of Bordeaux, the University of Cape Town, South Africa, Liverpool University, and the Royal Northern Conservatory of Manchester, U.K.

His podcasts, Jazz Insights, have been featured on numerous websites including the New York Times, and have been downloaded over 20 million times since May 2009.  All 240 podcasts are available at his website jazzinsights.site.    His CD, The Strangest Thing, was released on Jbird Records in May 2008 and his CD, Destination, was released in May 2012.  He plays Schagerl trumpets and an Adams flugelhorn. 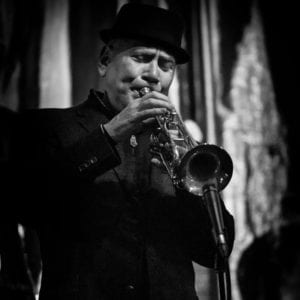